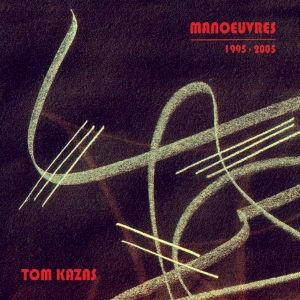 Manoeuvres 1995-2005 is a collection of recovered movements of a decade. Yet a decade never seems to sit in its limit; it leaks into its future as much as it remakes its past. The music pushes at these signposts like sentences sounding their thinking.

Far from finding relief in an ‘out-take’ genre, it is the setting of a decade’s limits that creates the album. This scaffold gives the compositions a grander scale than they deserve, but also an arrangement they relish. Though conceived years ago, the pieces only now begin to take shape; to cohere in the present like memories still forming. Whether from four-track cassette, eight-track tape, hard drive or cd, stereo mixes or multi-tracks, this music – now caught in an album’s net – does not sit idle, but challenges the present composer to address the musings of that younger one.

Manoeuvres 1995-2005 is a collection of sketches, out takes, film music and alternate mixes, that were recorded between the years 1995 and 2005. At one time or another these pieces were part of proposed albums, but these albums gradually mutated away from their initial themes, rendering the pieces stateless. As a result of this seeming relegation, these pieces lay in the bottom drawer for decades, and only now have found a theme to organize and animate them.

The pieces are like a poems, not simply in the tones of their expression, but in the actions needed to realize them in 2015. If imagined as an operation with words, then some had a word or two altered or included, while a few had a new sentence written. These types of actions emphasize the idea that to create a truth – in this case, the collection of a decade’s worth of varied music into an intelligible whole in the present – one might need to embellish, to alter – to abandon the idea that the original piece has an authentic quality not to be disturbed. This approach allows the music to settle into a time that it pushes and pulls against; past and future simply a manoeuvre of the present.

1  Sixes and Sevens
This stereo mix was the only remnant of a recording session with the bass guitar take, before an irreparable hard drive crash. I am thankful. It is from 2001 and the last of a long line of versions started in 1997. It is an experiment in rhythmic tension between the six-eight and seven-eight parts that resolve into the driving organ and bass lines.

2  Unbound
Painstakingly extracted from a cassette whose hiss had reached wind-like proportions. It dates from 1995 and snapshots my love of backwards guitar and dual basses, that are given expression in the simple beauty of a pentatonic scale. An alternative version was used in the short film The Ifs of Language. There is something about this piece that for me captures a feeling of liberation.

3  The First If
Composed for the 2003 experimental short film The Ifs of Language, with words by Peter Lyssiotis and video by Michael Karris. In that sequence it hints at the melancholia and inabilities of language. The pulses of its five-eight rhythm were used to directly create the staccato melody that hovers with a minimal range of notes.

4  You Could Be Sky
This is a markedly different version of You Are Sky, which predates the one that appears on my 2006 album Fleeting Eternities. In this version the drums and bass are returned, as is the revealed guitar that generates the curtains of texture that drape the piece. I still hear a certain possibility of ecstasy up there.

5  Five Ate My Guitar
I had always intended to make a more sophisticated version of this circa 1996 piece. But its simplicity, the skippy rhythm parts and its lead guitar of stylings signpost a place that I had often wished I had visited more often.

6  Sailing to Nafplion
The third of the compositions used in the The Ifs of Language. It had no title within the film, and given a certain nostalgia in that closing sequence, an urge was created to savour the impossibility and fantasy that its given title now suggests. Nafplion is a coastal town on the eastern Peloponnese where my father was born.

7  Intermoderne
Somewhere in there are the hazy fragments of musical ideas from the 1890s and the 1990s; the interplay between their modernities, between guitar and keyboard, between the slow swing of the drums and the deep sounds of a tape echo machine. It is an edit of two versions decided in this one.

8  Always Known
This is a multitrack remake from 2004 of a 1993 piece. It captures my joy and indulgence as a lead guitarist. The original 1993 guitar solo was a single improvised take, and the attempt to reproduce it in 2004 had me toiling with multiple takes and edits; the broad stroke freedom of the former to the one-hair brush detail of the latter – hoping that the original feeling comes through.

9  Ripple Blanket
Laying dormant as a synth and piano piece until the addition of the whisk guitars. This guitar technique, once relying on the handle of a kitchen whisk, now uses the surface of a metallic pen. When rubbed over the desired note on the guitar neck, it produces a shimmering violin-like sound. It has long been a favourite technique of mine to create slow moving melodies and washes of atmosphere.

10  From This Hill
An alternative version of the closing theme to the 1999 multimedia theatre production The Wound. Work on this version continued after the stage production had finished, to explore parts in the original demo and to drench the melody with as much emotion as possible.

11  Persistence of Paint
An experiment in fixity and release. Its ascending and descending tones run forwards and backwards across a looping beat of five-eight. Detailed post-production allowed it to pass from being a sketch to that befitting the closing manoeuvre on the album.